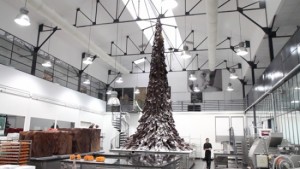 Isn’t this Christmas ‘tree’ looking…delicious? The French chocolatiers never cease to amaze us with their artistry, passion and colossal chocolate creations.
Patrick Roger, meilleur ouvrier de France, created this year a ten-meter-high chocolate Christmas ‘tree’ to raise money for France’s annual Telethon. The artist and his team worked for one month on this awesome project that weighted four tons. The impressive ‘tree’ was accompanied by legendary Christmas figures such as Santa Claus and his reindeer, all made of delicious dark chocolate. Roger’s idea was to create a winter wonderland, which should please and intrigue both adults and children. 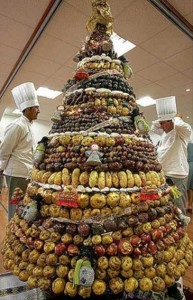 A very special and unusual Christmas tree made of potatoes was shown during the 2007 Christmas holidays at a local institute in Lima. The Peruvian students used almost 100 kg of potatoes to create it. What’s really fascinating is the fact that the Aymara people of the Andes cultivate more than 2000 varieties of potatoes which grow at 13,000 feet above sea level. “Best black woman,” “makes the daughter-in-law cry,” “best red woman,” “like a deer’s white tongue,” “like an old bone” and “red shadow” are some of the potato types found in this unusual Christmas ‘tree’. And yes, these are the true names of Peru’s multi-colored and shaped potatoes.