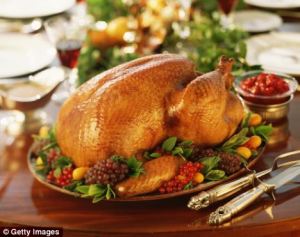 Ben Franklin, in a letter to his daughter, proposed the turkey as the official United States bird.

The average weight of a turkey purchased at Thanksgiving is 15 pounds.

The heaviest turkey ever raised was 86 pounds, about the size of a large dog.

Male turkeys gobble. Hens do not. They make a clicking noise.

Turkeys do not see well at night.

Wild turkeys were almost wiped out in the early 1900’s. Today there are wild turkeys in every state except Alaska.

Wild turkeys can fly for short distances up to 55 mph and can run 20 mph.

Turkeys will have 3,500 feathers at maturity.