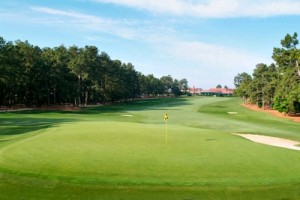 During the US Open,

The history of Pinehurst begins with Bostonian James Walker Tufts, who inherited a large fortune as head of several companies, most notably the American Soda Fountain Company. After selling the company, Tufts bought 5,800 acres in the Sandhills of North Carolina so that he could start a health resort. The purchased land was deforested and desolate land that had been previously a pine forest. Tufts desired to turn it into a New England-style small resort with immense greenery.

Wanting to make his resort a first class retreat, Tufts contacted Frederick Law Olmstead (the designer of Central Park and the Biltmore Estate). Under Olmstead’s direction, 220,000 plants and seeds were imported, and in three weeks the development of Pinehurst Resort was underway. Tufts named the resort, Pinehurst; “pine” represented the trees and “hurst,” an area of rising ground. Resort features included, cottages, a general store, riding, hunting, cycling and archery. In 1916, exhibition shooter Annie Oakley came to the country club and directed the Pinehurst Gun Club, teaching shooting skills to around 125,000 people between 1916 and 1920.

It is widely believed that golf was introduced to the area after Carolina Hotel guests were seen routinely hitting white balls at grazing livestock. New Yorker Dr. D. Leroy was then hired to build a golf course on the land, and by February 1898, a small golf course was constructed named Pine Hurst No. 1. By 1899, Pinehurst added an 18-hole, championship course named Pinehurst No. 2. Shortly afterward, courses No. 3 and 4 were built.

In 1900, Tufts hired Scottish golfer Donald Moss to supervise and direct the golf program. Moss remained with Pinehurst until his death in 1948, earning the reputation of being one of the most prestigious golf architects in the country, constructing over 400 courses.

Pinehurst Golf Club opened in 1903 and the resort later hosted popular golfers such as Sam Sneed, Bobby Jones and Arnold Palmer. Over the years, Pinehurst became home to the 1936 PGA Championship, the 1951 Ryders Cup Matches, the 1994 U.S. Open as well as the 1999 and 2005 U.S. Open Championship.

In 1980, Pinehurst became an incorporated municipality with ownership of the property shifting many times since then. In 1996, Pinehurst Resort became formally known as a National Landmark status for their achievements in golf history. Today, Pinehurst features over 144 golf holes and hosts eight championship courses. Guests from all over the world visit Pinehurst to enjoy its peaceful southern charm and relaxing resort amenities.